Shrusti Travels have come up with another two new cars Toyota Innova and Toyota Camry.(Date : 08-02-2011).

Shrusti Travels have come up with another two new cars Honda Civic And Toyota Fortuner .(Date : 01-01-2011). 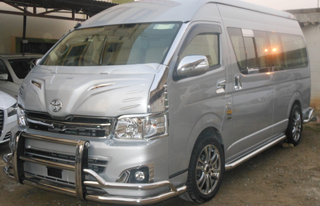 We take great pleasure in introducing ourselves as a professionally managed service provider to a wide range of customers from individual clients to corporate customers. 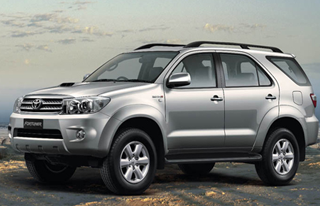 The Toyota Fortuner, also known as the Toyota SW4, is a mid-sized SUV. Originally assembled only in Thailand, but later also in Indonesia and other countries, the Fortuner is built on the Toyota Hilux pickup truck platform. It features three rows of seats and is available in rear-wheel drive or four-wheel drive. The Fortuner is part of Toyota's IMV project in Thailand, which also includes the Toyota Hilux and the Kijang Innova (in Indonesia). Developed in large part by Toyota’s Thai operations, the Fortuner has piggybacked the success of the Hilux and is now built in a number of countries including India, Argentina and Indonesia, although outside Thailand its success has been mixed.

However in the Sydney Morning Herald, Gillard who worked for the Toyota Technical Centre (TTC-AU) stated that the organization has been working on the Fortuner since 2006. In fact, this Sport Utility Vehicle (SUV) is designed in Thailand by Thai and Japanese engineers. However the facelift version of the IMVs vehicles including the Fortuner were designed in Australia by Toyota Australia which is also responsible for developing the next generation of the Fortuner

Benefits of Luxury Car Hire , From the prestige car makers like Bentley and Porsche to the luxury vehicle manufacturers like Mercedes, Audi and BMW, Sixt has just the perfect wheels for people from all walks of life, age-groups, and different tastes and preferences who look for luxury car hire. It is a perfect option for those who dream of sliding into a luxurious ride and hitting the road in style. Hiring a luxury car has its own set of benefits that a self-owned car surely doesn’t provide.

Premium Car Rentals For personal and friendly service book your car rental with us. We operate a large fleet of premium cars for hire, which include Chevrolet Optra, Toyota Corolla, Maruti Baleno.

We have a wide range of Luxury cars including Mercedes Benz, Mitsubishi Lancer, Model Viano among others. Luxury car is usually more comfort, design all luxury cars.

The cars running speedily on the unending streets remind us of the mind who invented these machines which made man capable to race against time. In the past few years the.

Car hire bangalore, For personal and friendly service book your car with us. We operate a large fleet of premium cars for hire, which include BMW,BENZ, Toyota Corolla, etc..

Cab hire Bangalore, The cars running speedily on the unending streets remind us of the mind who invented these machines which made man capable to race against time. In the past few years the

To give the best times to our customer when they are under our service. To build a technology driven, nationally networked personal ground transportation and luxury car services to our customers. At Shrusti Travels, you will find a team of dedicated professionals, each contributing their optimum expertise to deliver and ensure complete satisfaction to our customers. We give you a rich experience of luxury travels.